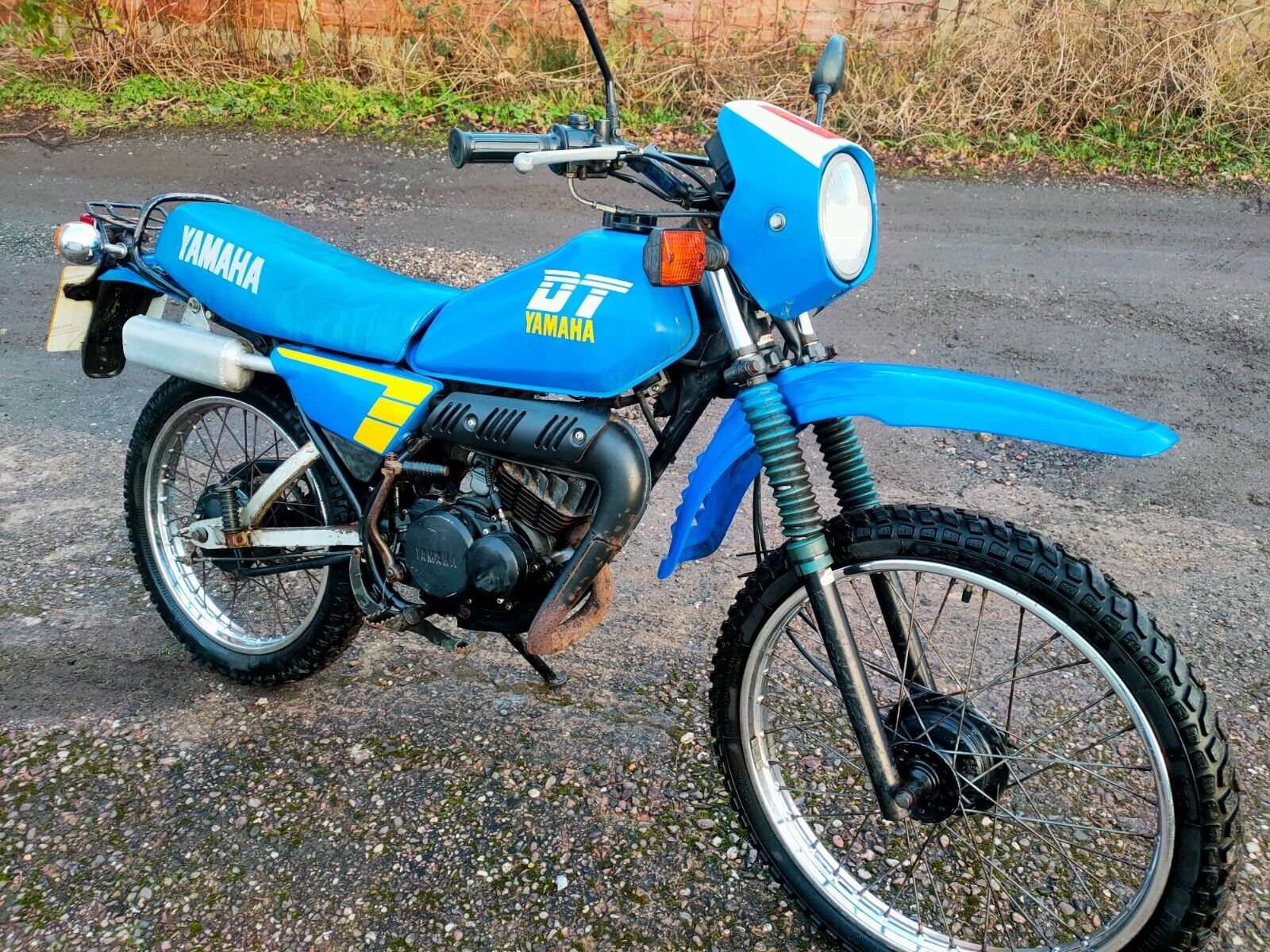 This is my son’s motorcycle which regrettably selling as it’s car time.

Purchased the bike 5 years ago for a commuter for my son to get to college and back. Having grown up with classic Yamaha’s it was an easy choice for him.

When I bought the bike it had a new 55cc top end rebuild and a full fresco exhaust.

I have had the gearing changed at SPA motorcycles Cheltenham so the bike can keep up in modern traffic rather than be stuck at 30mph which I feel is dangerous. It will happily run between 40 and 50 mph. Majority of work has been done at SPA.

The bike has been laid up for a year.
I have put a new battery on it, cleaned the carbs, new plug and filter, replaced the carb to air filter rubber.
Taken the bike out for a few miles. Ran well. Brakes, clutch and gears worked as expected. Ran really well.

I haven’t tried to do any cosmetic work on the bike. It’s a learner 16er that has been used all year round.
Rear indicators can be purchased easily. Some one has repainted the tank at some stage. The clocks have had their top cover changed at some time and secured crudely. Engine cases and swinging arm could do with a coat of paint and generally needs TLC. But my main aim is a sound running bike.

Genuine sensible offers will be considered.

Motorcycle helmet cameras are becoming increasingly popular for those who like to record their rides in the… [...]

Motorcycle riders have to stay aware of their surroundings while on the road, and communication with other… [...]

If you are new to the world of motorcycling, there are many things to consider when getting… [...]

Essential Tips for Riding your Motorbike Through Winter

Planning Ahead: Riding a motorbike through the winter months can be a daunting prospect, but with the… [...]

Vespa: The Magic of Italian Scooters

Vespa scooters have been an iconic symbol of urban transportation since the first model released in 1946.… [...]

We use cookies on our website to give you the most relevant experience by remembering your preferences and repeat visits. By clicking “Accept All”, you consent to the use of ALL the cookies. However, you may visit "Cookie Settings" to provide a controlled consent.
Cookie SettingsAccept All
Manage consent

This website uses cookies to improve your experience while you navigate through the website. Out of these, the cookies that are categorized as necessary are stored on your browser as they are essential for the working of basic functionalities of the website. We also use third-party cookies that help us analyze and understand how you use this website. These cookies will be stored in your browser only with your consent. You also have the option to opt-out of these cookies. But opting out of some of these cookies may affect your browsing experience.
Necessary Always Enabled
Necessary cookies are absolutely essential for the website to function properly. These cookies ensure basic functionalities and security features of the website, anonymously.
Functional
Functional cookies help to perform certain functionalities like sharing the content of the website on social media platforms, collect feedbacks, and other third-party features.
Performance
Performance cookies are used to understand and analyze the key performance indexes of the website which helps in delivering a better user experience for the visitors.
Analytics
Analytical cookies are used to understand how visitors interact with the website. These cookies help provide information on metrics the number of visitors, bounce rate, traffic source, etc.
Advertisement
Advertisement cookies are used to provide visitors with relevant ads and marketing campaigns. These cookies track visitors across websites and collect information to provide customized ads.
Others
Other uncategorized cookies are those that are being analyzed and have not been classified into a category as yet.
SAVE & ACCEPT